A la carte (On demand)

Organize your stay as you wish : choose your excursions. 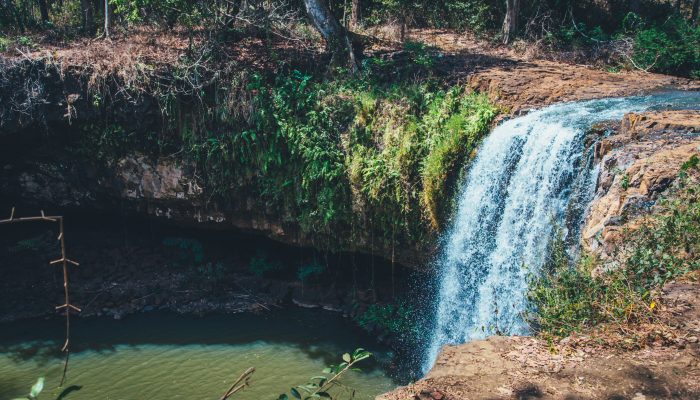 Trip to the waterfalls

A short trip through fields, orchards & rubber plantations will take you to the waterfalls, on the way back we shall stop by Lake Yalaom, a round lake surrounded by the forest, to have a swim (ideal for the first afternoon). 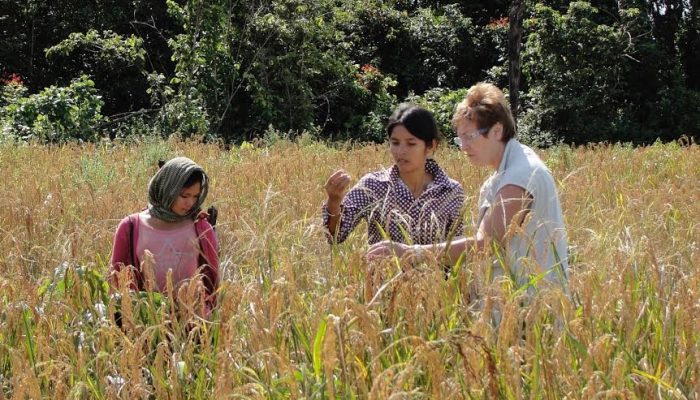 Enjoying a particularly fertile soil, abundant rains and a very favorable altitude, most of Ratanakiri province has by now been converted to agriculture.  Cashew nut trees and rubber plantations are everywhere as well as orchards and market gardening. According to the season we invite you to discover these riches and those who grow them. Morning or afternoon leave for ½ a day to the countryside surrounding Banlung town. 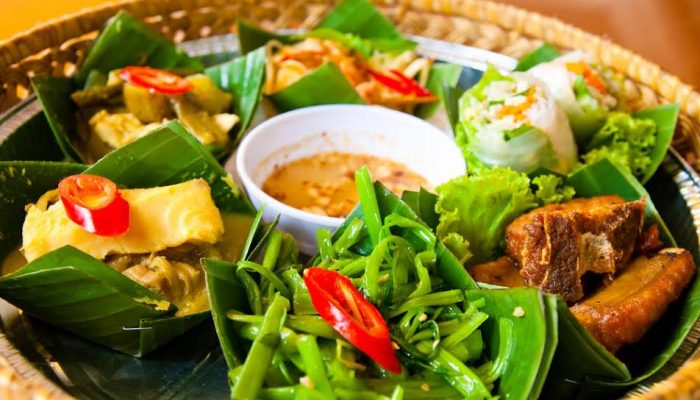 Departure for a little tour of the Banlung market with our chef who will be assisted by a translator. We select our fresh goods there and go back to Terres Rouges’ kitchen to prepare our dishes.
Menu : (will vary according to season)
Raw fish salad  with lemongrass/ Banana flower salad / Nems
Fried fish with Cambodian spices / Fish Amok / Pork or chicken carry / Fried chicken with basil leaves / Fried chicken with cashew nuts
Deep fried pineapple and bananas with honey / Pumpkin cake 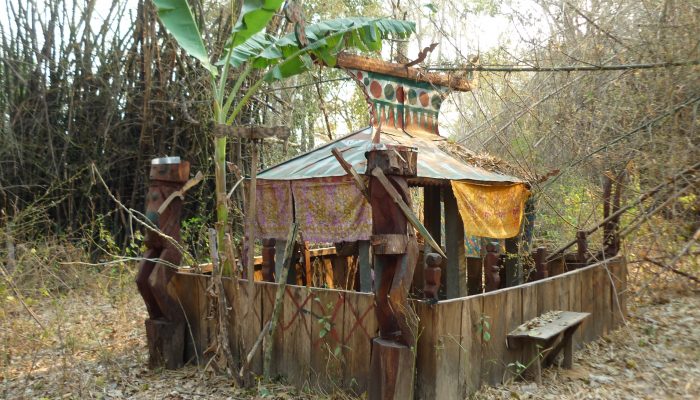 Direction northwest, we cross Kroeung villages and bamboo forests before reaching the village of Kachon located on the left bank of the Sé San River. Upstream are a certain number of Tampoun and Katcha villages that practice funeral statuary ; we shall board a boat towards the village of Koh Peak that displays superb totems. After the visit we head towards Voeune Saï which is located 45mn downstream on the left bank of the Sé San river. This village is divided in two, a Chinese and a Lao village, thanks to trade the Chinese part is very prosperous  with some beautiful traditional shophouses while the Lao part is far less developped.
Chinese and Lao languages are the main spoken languages there. 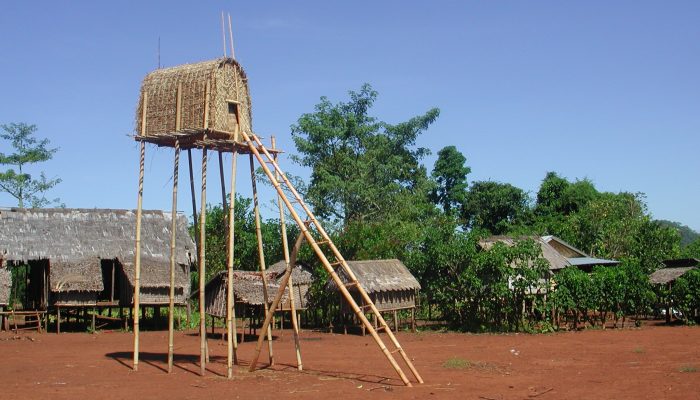 Today we head north towards Laos and the village of Taveng We come first to a clearing in the forest which is paved with lava. A few hundred meters from this clearing there is a waterfall – in the rainy season of course –surrounded with tiger caves. Then we shall stop at different villages situated on each side of the road. About two thirds of the way we shall come to a big village on the right where (according to the season) you will see very high bachelors’houses ; When the young men marry, their houses are destroyed to be rebuilt by younger ones at the following season. 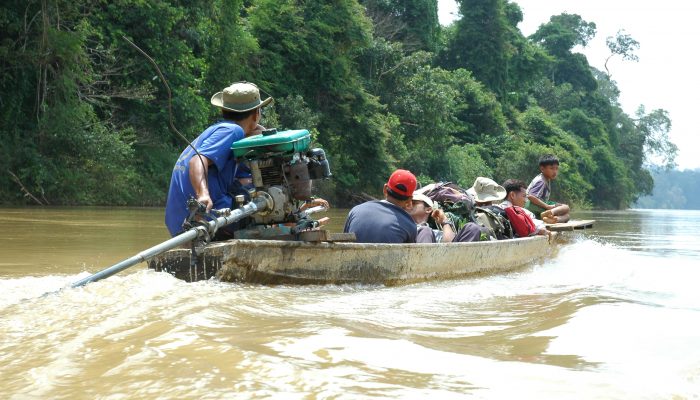 The Jarai Territory & the Zircon mines

We head east, towards the Vietnamese border on a very good road. We drive through rubber trees and cashew nuts plantations and stop at the Bokeo zircon mines located a few hundred meters from the main road. This «zircon rush» has completely transformed the area into some kind of huge Swiss cheese drilled with hundreds of wells all roughly 60cm wide by 12 meters deep. The miners go down there with absolutely no protection, accidents do occur…
After the visit we head north, towards the village of Andong Meas (the Gold Well) to reach the superb Sesan River for a boat trip upstream towards Jarai villages still carving animist funeral totems to protect their dead. 90 minutes later we reach an abandonned village with a graveyard full of beautiful statues. Irremediably doomed to destruction in the jungle, those statues accompany the dead in their last trip. 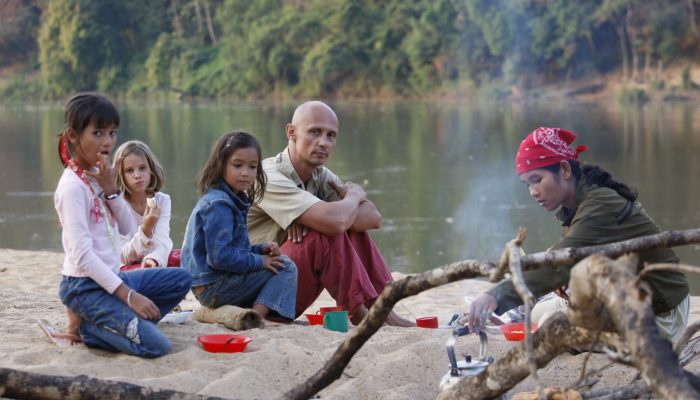 Katcha totems & camping on a desert island (a must for families).

We head north east across bamboo forests to the village of Voeun Sai on the left bank of the Se San river, the view on to the Chinese village on the other side is particularly attractive; this region is almost a Chinese enclave in Cambodian territory, as a number of villagers still do not speak the khmer language even though they have been living there for generations. Upriver we shall find a number of Tampoun and Katcha villages who are famous for their funeral statues. We get there by car and cross the river by boat to visit the graveyard. We carry on upriver, if we wish so, we may stop in another village that houses a graveyard, similar to the other one but less visited, then we reach a big island in the middle of the Se San river. We organize the camp : mats on the beach, campfire… and the evening can start.
After breakfast we leave by car towards the Kroeung Territory, we first arrive at a clearing in the forest which is paved with lava, it’s the crater of an ancient volcano. A few hundred meters from this clearing there is a waterfall – in the rainy season only –surrounded with former tiger caves. Then we shall stop at different villages situated on each side of the road. About two thirds of the way we arrive at a big village on the right where (according to the season) you might see very high bachelors’ houses. When the young men marry, their houses are destroyed to be rebuilt by younger ones at the following season.
Back to Terres Rouges in the afternoon.